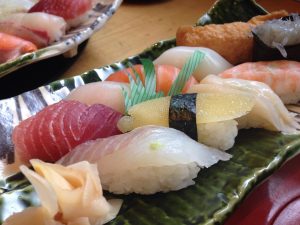 Are you a sushi lover?  Sushi, now available globally, is also loved by many  of Japanese people. Sushi was originally a dish for special occasions. Since cold chain distribution as  an infrastructure, equipped throughout Japan 30 years ago, we can enjoy sushi in good quality even at sushi go-around restaurants and other price friendly places.

Historically, it is  said sushi came to Japan from China about 1200 to 1300 years ago with the information of rice production method. The sushi at that time was preserved food which had fermented river fish on rice seasoned with sweet vinegar.

At the end of the Edo era(Edo era:1603-1868), food stall owners started to serve sushi just in front of customers. Those owners who use freshly caught seafood from Tokyo Bay such as fishes and seaweeds were making sushi for people in Tokyo. Sushi is originally a Tokyo food.

After the Great Kanto Earthquake(1923), some sushi stall owners evacuated to outside of Tokyo and sushi spread all over Japan. 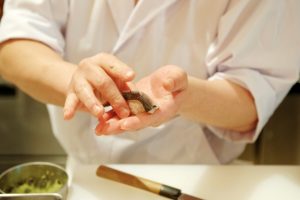 After World War Ⅱ, it was banned to sell raw food on outdoor stalls, therefore sushi became available at indoor stalls, which is origin of current face to face sushi bar style. Sushi go-around style appeared in early 1980s, which made sushi accessible food to everybody.

There are varieties of sushi, from luxury almost like handmade jewelry made by your own chef just in front of you, to accessible like sushi go-around, Japanese enjoy hand rapped sushi at home as well. You can enjoy many different varieties of sushi in Japan. Please contact with us to choose your favorite sushi style.

Not a member yet?  Be a member of QuickHelpJapan and enjoy like a local!