Halloween wasn’t traditionally celebrated in Japan as it is in the United States. But Halloween in Japan has grown in popularity thanks to holiday events at the Tokyo Disneyland, Sanrio Puroland and Universal Studios Japan theme parks. Today, many Japanese stores get into the spirit of Halloween by selling colorful decorations, costumes, and sweets to those wanting to observe the holiday.

Halloween in Japan is mostly geared toward adults who want to dress in costume.

Trick-or-treating from house to house isn’t particularly popular for children in Japan. 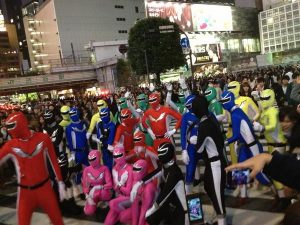 “Kosupure,” which is the Japanese word for cosplay (or costume play), is popular among Japanese youth at Halloween.

Costume play in Japan usually means masquerade. People portray anime, movie or computer game characters by dressing in costumes, uniforms, samurai/ninja costumes, and kimonos. Make-up and masks are also used to portray favorite characters. Cosplay is popular not only during Halloween but also at events year-round. 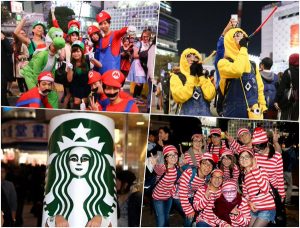 Access: Shibuya Halloween takes place in the area around Center Gai street in Shibuya. The entrance to the street is                 beside the QFront building near the Hachiko Exitof Shibuya Station.

Shibuya Halloween is an informal event that tends to occur on Halloween on Center Gai street in Shibuya.

It’s a gathering of people in Halloween costumes who hang around to see and be seen. In recent years, it’s attracting close to 100,000 people. This is absolutely NOT for kids, you can see all grow ups enjoying Halloween! 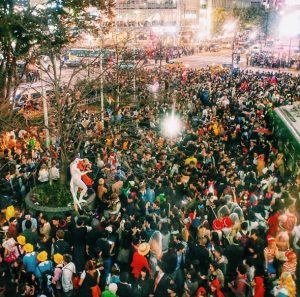