After Halloween is over, you will start seeing winter illuminations all over Japan.

Tokyo, as it is the capital of Japan, has the numerous good spots for them.

Don’t keep yourself inside the house for the whole winter evenings. Try to come out sometimes to enjoy this beautiful senery in your neighborhood.

They usually continue at least till the end of December, with a few exceptions going on till as late as the week of Valentine’s Day in  February.

The name of this illumination in Japanese literally means “Blue Cave” which describe exactly what it looks like.

These beautiful, yet mysterious displays are located in front of the headquarters of NHK. 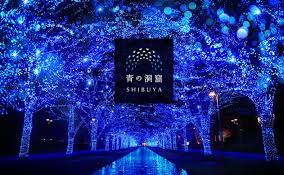 The theme of their illuminations this year is “space” and create planets and stars using LEDs. There are multiple illumination displays around Midtown. The main venue is located in the park.

The reason it attracts many visitors around this time is because they change the details of the displays depending on a day of the week. 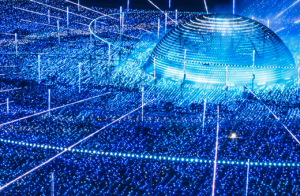 To celebrate its 15th year anniversary since opening, Caretta holds a special light-up show inspired by the movie, “Beauty and the Beast” every night from 5 pm to 11 pm. They host 250,000 LED lights in total. 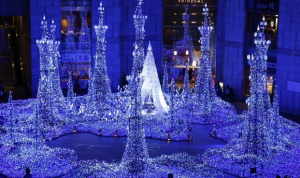